Want to create your own custom character in Blazing Beaks? Awesome, you are in the right place. Here you will find everything you need to create one. For creating character you might need character editor. You can download it:
Blazing Beaks Character Editor

Also templates might be useful for creating sprites:
Sprite templates

To make character creation accessible for everyone we made Blazing Beaks Character Editor. Using this editor you can easily configure character parameters, import sprites, sounds, upload to Steam Workshop or export and share with other players. Recommendations and instructions on how to use editor can be found below.

To create new mod launch Blazing Beaks Character Editor (bbceditor.exe) and click Create Mod button. If there is a mod already created you can select it in the list and click Edit Mod to edit it.

After clicking Create Mod or Edit Mod buttons configuration window will be opened. In configuration tab you can edit various parameters. The list with all the parameters and what they do you can be found below. 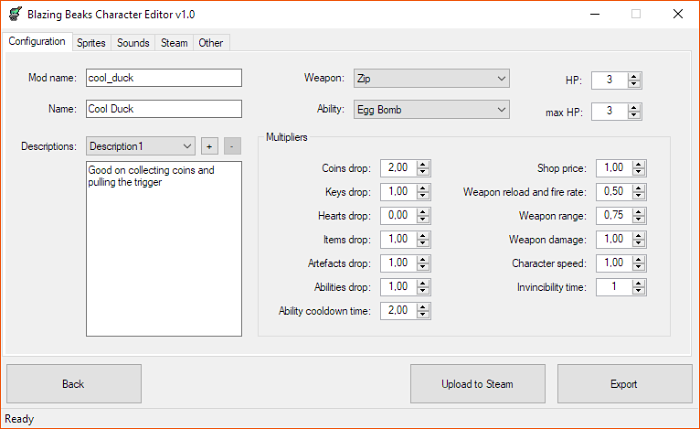 Once you created new directory for new character in mods folder and added character folder name to mods.txt, now you can use character configuration file config.ini from template. You will find all the parameters that can be changed in the list below. 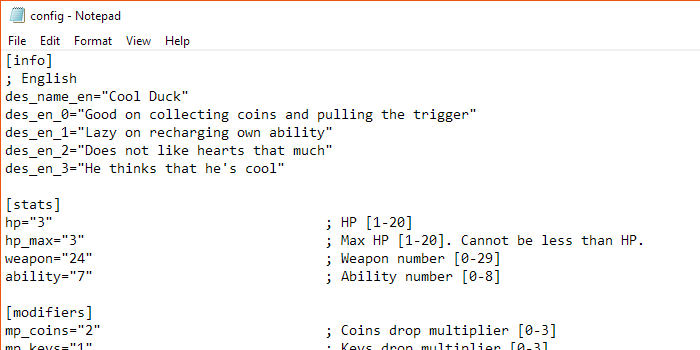 Every character has several sprites. For example some of them are used for idling, running, some are used in menu. If any of the sprites are not present, custom default sprites will be used. To make it easier to create your own sprites, sprite templates might be useful. The list of required sprites can be found below.

You will need have any of many software to create sprites and here are some of them that can be used:

Best way to create new character visuals is being consistent with current Blazing Beaks characters style and here are some best practices to do it:

In Blazing Beaks Character editor "Sprites" tab you can import all the required sprites. Select the sprite according to it's name and editor will rename file if needed and place it where it should belong. 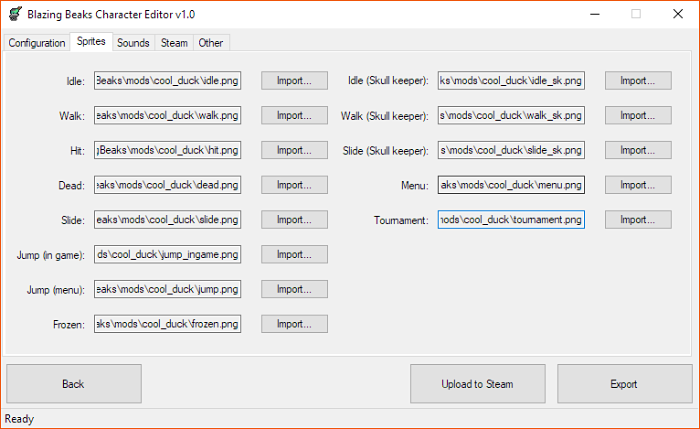 If you are adding sprites manually place all the sprite images in character mod folder and name it according to names.

All the sounds must be in .ogg format. If any sound is missing the default one will be used. Although the sounds are not required to submit new character mod to Steam Workshop they make character alive, adds personality and make mod to look professional.

You will need some software to make sounds, you can use a free one:

Similarly as with sprites, in Blazing Beaks Character editor "Sounds" tab you can import all the sounds. Select the sound according to it's name and editor will rename file if needed and place it where it should belong. 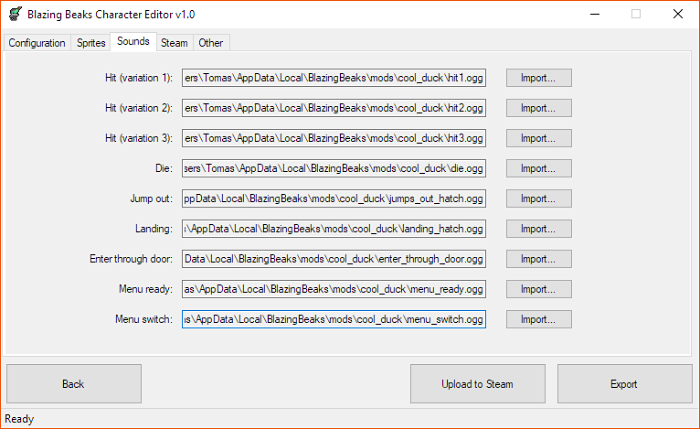 If you are adding sounds manually place all the sound files in character mod folder and name it according to file names in the list.

Before making mod available to public it is highly recommended to test it thoroughly and make sure that mod is fully functioning without any issues. In order to test a newly created mod there is no need to upload it to Steam Workshop.

If you created a mod with Blazing Beaks Characters editor and saved all the changes by clicking Back and choosing Yes in prompt window you can launch the game and a new character should already be there. If you went through the process of manually creating a mod just run the game will load your mod if you setup everything correctly.

Every time you make changes to your mod, Blazing Beaks has to be relaunched to load an updated mod.

To upload mod to Steam Workshop Blazing Beaks Character editor must be used. Configuration must be filled and sprite files imported. Additionally, go to "Steam" tab in Blazing Beaks Character Editor and import preview image and fields required for Steam Workshop (Title, description and change notes). Preview image must be square and at least of 512x512 size. Set visibity to Hidden. Make sure that Steam client is running and click Upload to Steam button to start uploading.

When mod is uploaded to Steam Workshop as Hidden you can subscribe to it on Steam Workshop and test it in the game. Make sure that everything is working properly before setting visibility to Friends only or Public. If you make any changes upload an update again. 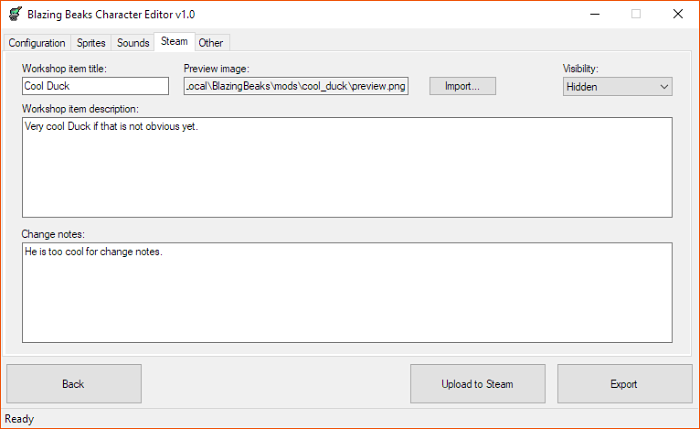 You can share your created mods with others without Steam Workshop. Using Blazing Beaks Characters Editor you can click Export button and mod folder will be created at your selected location with all the assets inside.